A Mobile Service was held at Amban Ganga Divisional Secretariat Matala. HDO participated in the program and provided awareness on Human Rights, Health, Land issues, Women and Child Rights. The Article regarding the program was published in 'Thinakkural' Newspaper on 6th July,2019. 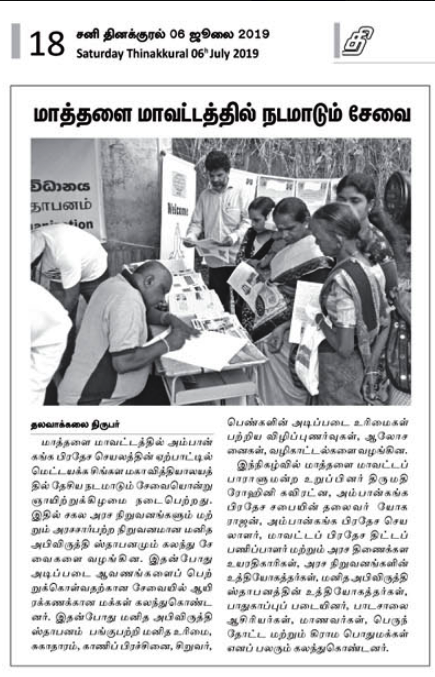 A media conference on ' Land Rights'. The related article was published in 'Mawbima' Newspaper . 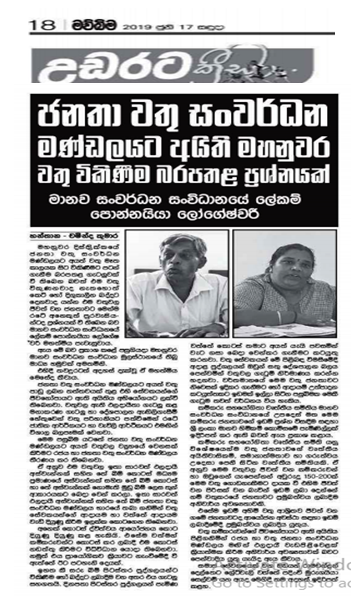 A media conference on ' Land Rights'. The related article was published in 'Tamil Mirror' Newspaper. 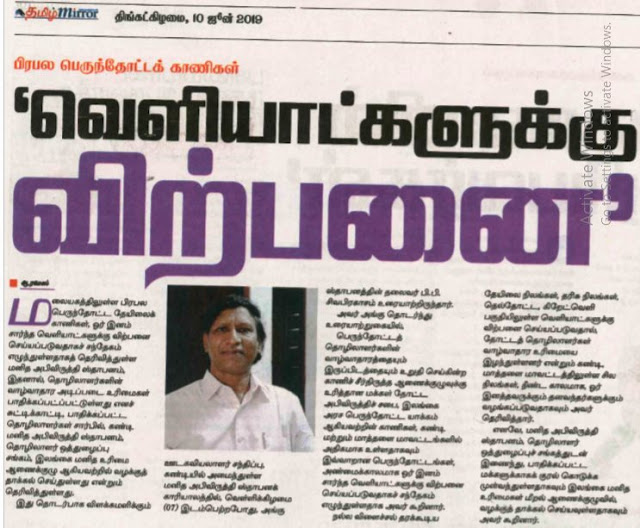 
People living on the hill country plantations face various difficulties in accessing the state or public services. Since the social periods the management of the plantation have been outside the purview of the general state administrative units. Even now the vestiges of such scenario continue to remain. The right to reach the general services remains questionable as far as these people are concerned. Although various practical reasons are citied, administrative and language facilities and state policies are beyond reach of these people due to lack of will on the part of the government. 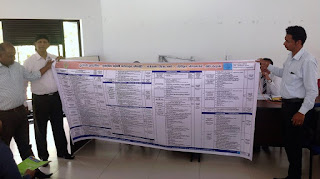 HDO, with these problems in view, initiated a project to facilitate the people to approach the public services, intended to prepare a banner or board detailing the services available to the people from departmental or divisional secretariat offices and exhibit them in the Grama Seva Niladhari office or the plantation office. The action was collaborated with CCFD of France. Action has been taken to provide such banner/ boards to 150 DS offices in the Nuwara Eliya district.

The Ambagamuwa Divisional Secretary, addressing the opening event of the project stated, we trust that the plantation people who have been sidelined, will benefit from this HDO initiated project. All people have the right to avail themselves of the Divisional Secretariat Services: and, so the plantation people too can reach us. We trust that these banners/ boards will guide them to us. 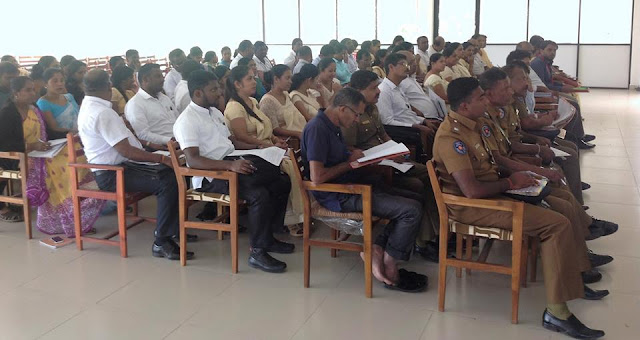 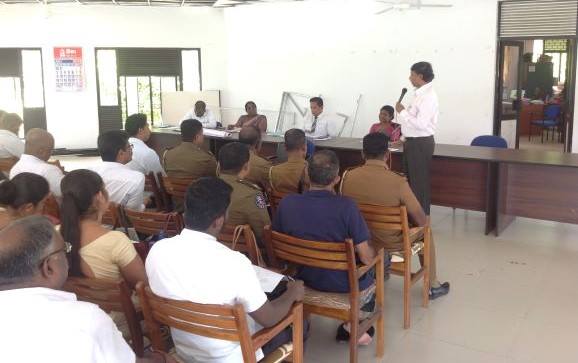 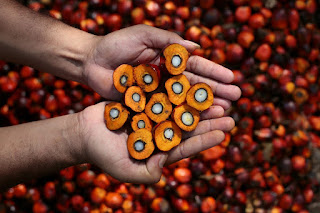 Palm cultivation has become a serious challenge to the existence of tea and rubber Plantations, in the central part of Sri Lanka since 2017s. The Sri Lankan Plantation sector which had been coffee, tea, rubber and coconut changes over to Palm Plantation. It was in the context of destruction of rubber cultivation in the Kegalle district plantations since of late in order to cultivate Palm trees that opposition mounted is not only from the Plantation people, but even from their rural counterparts. 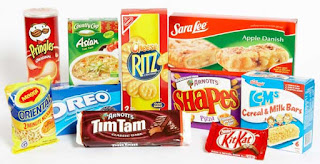 The Palm oil tree is originates from West Africa where it grows in the wild and later developed into an agricultural crop. Today 4.49 million hectares of land in Malaysia is under Palm Oil cultivation. Palm oil is cooking oil. It is in maximum use worldwide as an ingredient in food production. The oil extracted from Palm is used for cooking purposes in many countries and has become a 55% component of vegetable oil. It is also used in producing butter, food items, instant food, chocolate, ice cream and snacks, and in addition, it is being used in producing soaps and cosmetic items, etc. Extensively cultivated in the Asian and African Countries, Palm has become a major income generating crop in Indonesia and Malaysia, providing direct and indirect employment opportunities to hundreds of thousands of people. In 2013 major portions of foreign exchange of Indonesia and Malaysia came from the 50% export of palm oil. Palm oil occupies a major share as cooking oil and in cosmetic items in many Asian and European countries.

Hence many Asian Countries encourage palm cultivation. The cultivation needs more land and labour and in their background, private companies encouraging palm production has led to serious environmental, social and economic consequences. Moreover, the labour rights of workers face serious erosion. In the African and Asian Countries, the jungles cleared as at the 2008s, to cultivate palm, are estimated to be 5.5 million hectares.

Workers are engaged in, 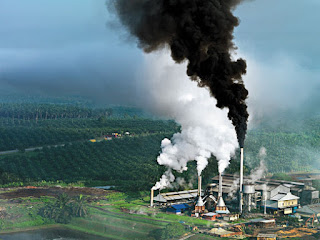 Harvesting applying weedicide and pesticide are marked as risky occupations. Bunches of nuts – weighing about 10 to 25 kgs – from each tree have to be brought down using long knives. At the same time chemical pesticides have to be sprayed.
Chemical weedicide and pesticide, are said to be causing various diseases to the workers handling them.
Since a majority of workers engaged in the Industry, are migrants, they are subjected to various forms of exploitation. Loss of their political, social, economic and cultural rights.

Many rubber producing countries changed over to palm cultivation. These resulted in the increase of men labour. They were occupied in harvesting. Women workers who were recognized as efficient tappers in rubber Plantations, lost employment opportunities and pushed out as non-abled.
Women are engaged in land and palm tree maintenance, and collection of plucked nuts from the ground.


The increase of palm estates is said to dry the underground water and cause drinking water problem.

However, it has become a major plantation crop. In many countries it has become, a major profit earner with demands increasing nationally as internationally. 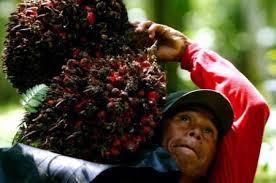 At the same time, as the western consumers are aware of and active and the consumers are  the human rights, respected to the rights of workers and small producers, they rise to occasions, when such rights are violated. In this background, the producers, and human rights organizations have founded a structure namely, Round Table Discussion based on the principle of recognition of labour cultural and human rights of workers and small producers. Therefore, the countries and  others involved in the trade should ensure that the policy planning and governing the project the human, cultural and other rights and round welfare of the workers and environment.

The Palm oil tree cultivation is introduced to Sri Lanka in late nineteen sixties, and has been spread over the southern part of the Island, mainly in Galle district. In the beginning the people had not had any information about the industry. They appeared to have been totally unaware of the crop, cultivation, production and the procedure. Nor did they have a clear idea of its positive or negative impact, it did not encounter any resistance. Neither the trade unions nor civil organizations came out against it firmly. Taking advantage of this many Plantation companies encouraged this projects in the Southern Province. This has led to the expansion of the cultivation to nearly 9000 hectares(www.firstcapital.lk/tag/palm-oil-cutivation-Sri Lanka) by 6 Plantation companies. In 2015, Sri Lanka produced 18,000 MT of Palm oil. (www.dailymirror.lk/article/sustainable oil palm).


WSU consulted with their members and labour leaders. HDO contacted with the relevant Organizations and activists in Malaysia where the palm oil is produced in a larger amount and obtained information about Palm oil tree cultivation. According to the sources it was known that this cultivation bears negative impacts than the positive impacts on the environment and the workers. The HDO studied more about the impacts of the Palm oil tree cultivation such as the ecological impact, the labour rights of workers face serious issues, land problems, It is also noted that the human rights of workers employed in the oil factories are in serious jeopardy, hardest labour but lesser pay use of unsafe pesticides.

This gave a background to HDO supported WSU’s campaign on issues related to Palm cultivation. It is following this campaign that the workers of the Plantations which made arrangements to cultivate Palm trees and the villagers lodged strong protests against the project. The protest even extended to where the people working in the Estates stopped saplings being planted – put up road blocks and take to work stoppage.
They have even explained the after effects of the cultivation, at meetings organized by the Companies. It is noteworthy that religious dignitaries are in the forefronts of the people’s campaigns.
A Malaysian team visited twice to the relevant areas together with HDO and gathered information.


Moreover the HDO together with WSU conducted Awareness raising campaign in number of Estates in Kegalle district, training programs in both Estate and village level and formed an Action Committee in order to create awareness and action. It also printed around 5000 leaflets in Sinhala and Tamil and distributed among the target people. HDO has first time published a major article on Palm oil cultivation in a newspaper which was widely read by Sri Lankan and Plantation community.

Worldwide the ordinary people resist the profit oriented economic model which is hosted to human rights, human welfare and environmental safely. In this background we believe the protest of the Plantation workers hand in hand with the rural people against the Palm cultivation, will provide a new chapter in their struggle to win the women’s workers, and people’s rights and change the managerial relations and protect the environment. 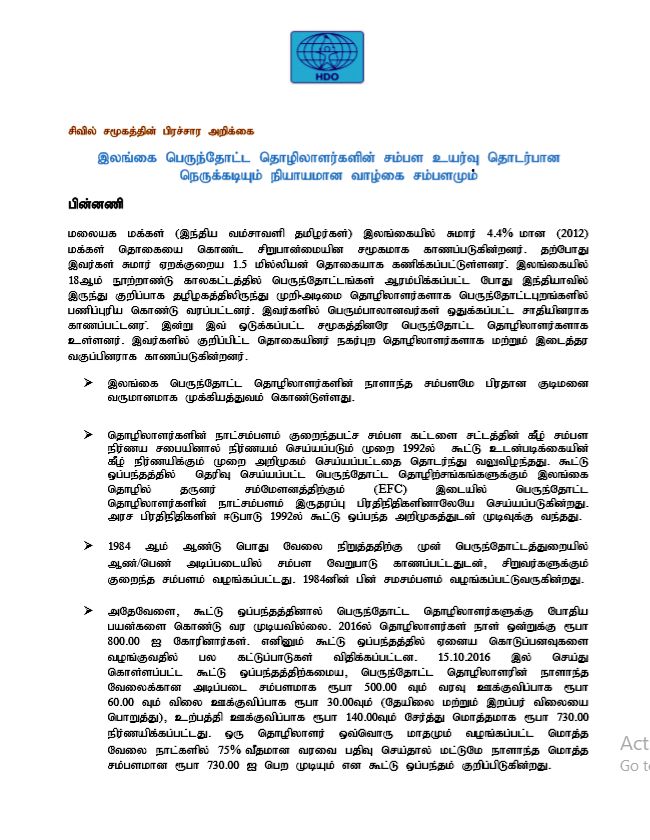 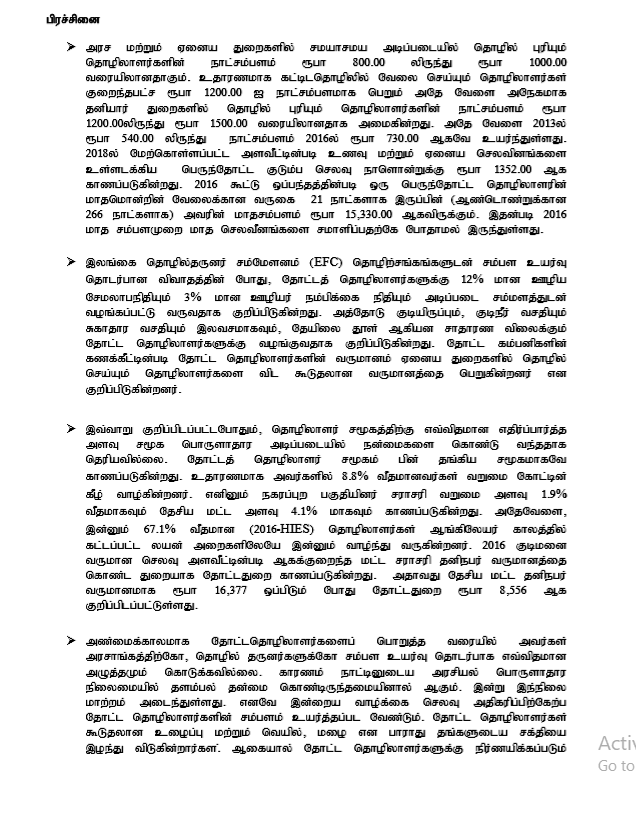 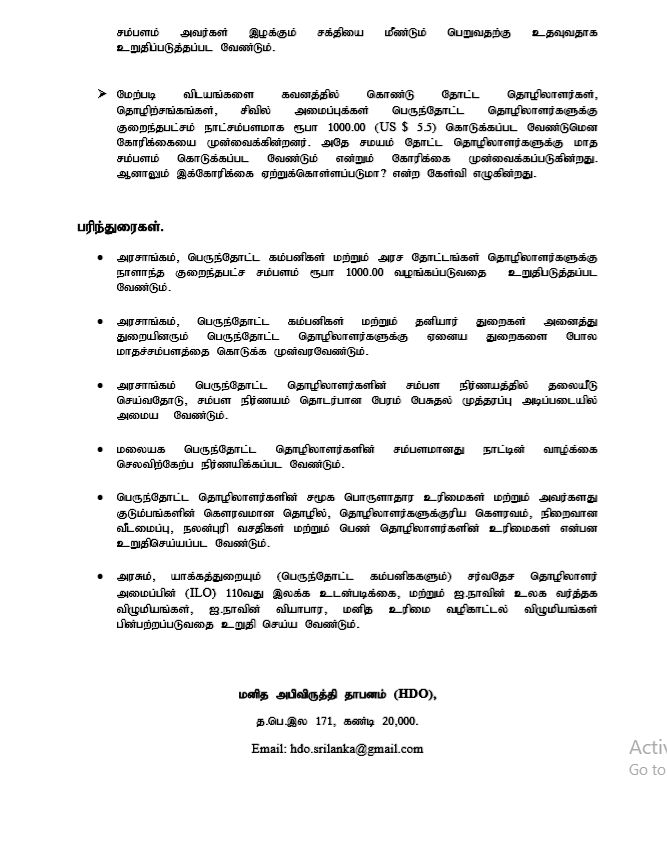 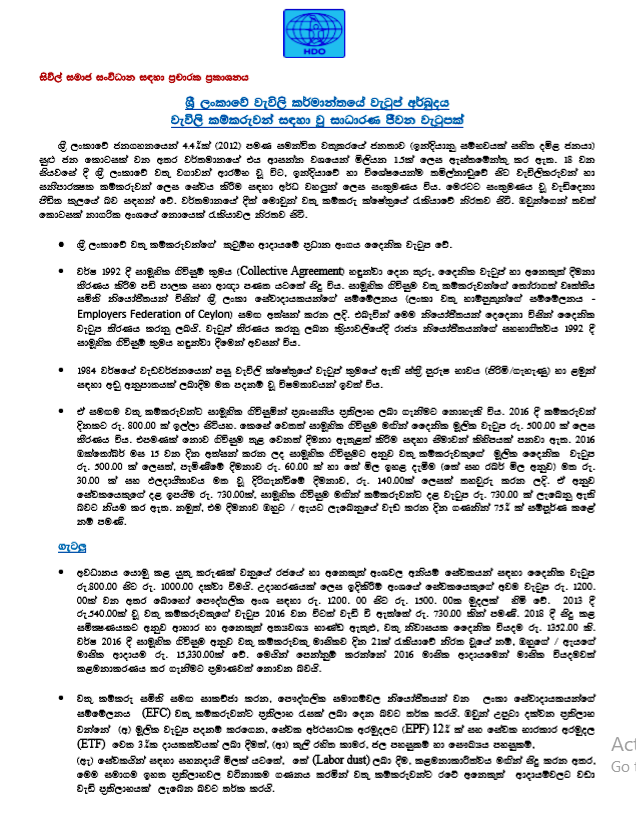 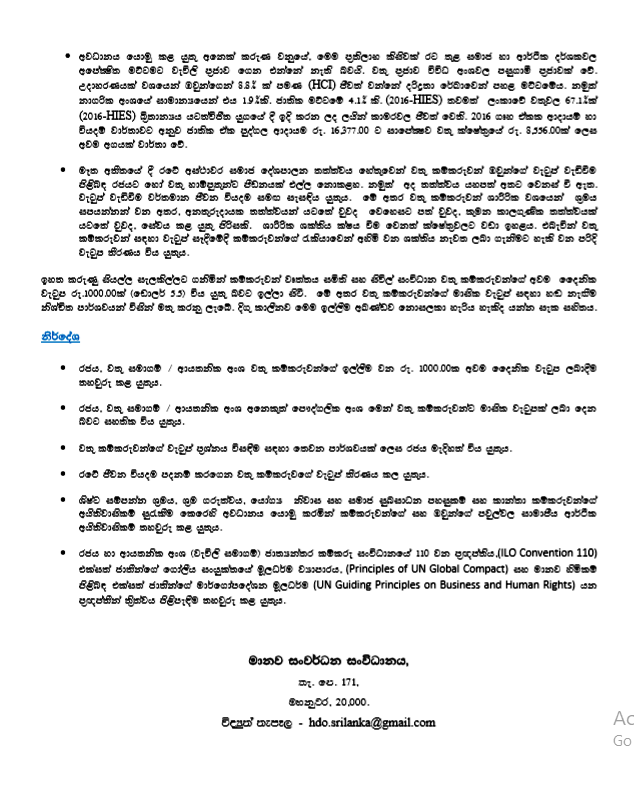 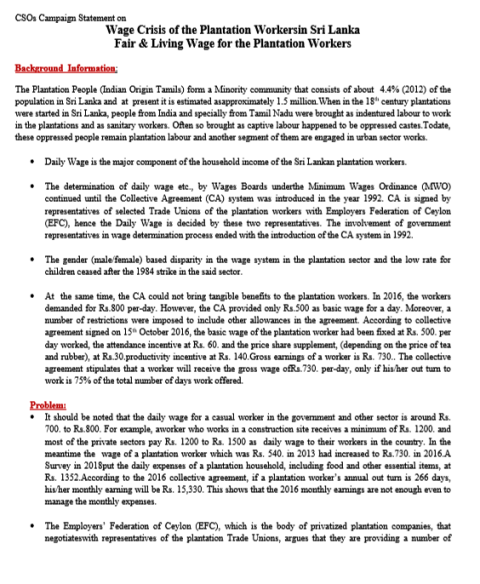 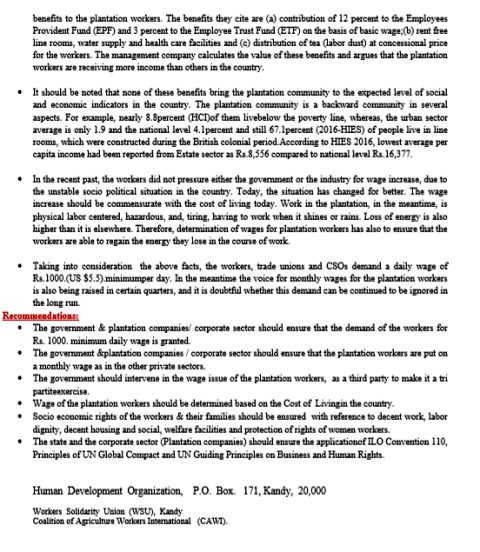